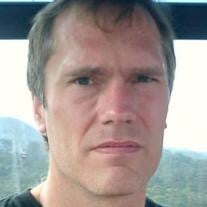 Brad Smith, 47, of Marietta, died August 28, 2012. A Memorial Service will be held at 7:00 p.m., Monday, September 3, 2012, at the Mayes Ward-Dobbins Chapel, Marietta. Brad was a graduate of Georgia Tech and worked at Lockheed. He attended... View Obituary & Service Information

The family of Brad Smith created this Life Tributes page to make it easy to share your memories.

Send flowers to the Smith family.