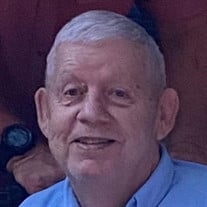 Carl Brinson Roland, 73, of Powder Springs, Georgia, passed away on October 18, 2021 after a courageous battle with Pancreatic cancer. Carl Roland was born in Chester, Georgia and was the youngest child of Myrtice Roland. Carl graduated from Campbell High School before joining the Air National Guard. He later received his master’s degree in Secondary Education and History from the University of West Georgia in 1975. Upon graduation, Carl went on to become a teacher at McEachern High School where he coached JV football for 4 years, varsity baseball for 17 years and varsity softball for 25 years. He touched the lives of thousands of students and athletes during his time at the school. Carl was recently inducted into the McEachern Athletic Hall of Fame and will be inducted into the Georgia Dugout Club Hall of Fame later this year. In his spare time, he loved being outdoors, spending time with his family, watching his grandchildren play baseball and cheering on the Georgia Bulldogs. He was a kind and loving partner to his wife Pam for 49 years, as well as an amazing father to their three children. Just like he dealt with all experiences in life, Carl managed his illness with strength and grace, and wanted to spend as much time with his loved ones as possible, including dear friends as well as former students and players. On his final day, he was surrounded by his wife, children, and grandchildren, who he adored more than anything else in the world. Carl’s favorite saying was “sounds like a winner” and he was indeed a winner in the eyes of those who knew him best. In addition to his wife Pam, Carl is survived by daughter Katy Tenerovich and her husband Jimmy Tenerovich of Powder Springs; daughter Abby Roland of Powder Springs; son Brinson Roland and his wife Jennifer Roland of Carrolton, and five grandchildren: Jaxon, Harper, and Hudson Tenerovich, MJ Robinson, and Avery Roland. He is also survived by his brother William (Bill) Roland and sister Sue Rhone as well as brothers- and sisters-in-law, and several nieces and nephews. He is predeceased by his mother, Myrtice Roland, siblings James Roland, Jeanette Taylor, Imogene Bailey, Jeraldine Bailey and his mother- and father-in-law Frances and Harrison Osterhoudt. Visitation will be held at Mayes Ward-Dobbins Funeral Home in Powder Springs on Wednesday, October 20th from 5:00 until 8:00 p.m. A memorial service will be held at the funeral home on Thursday, October 21st at 2pm with visitation one hour prior. Reverend Dr. A. T. Stewart will be officiating. Family has asked that in lieu of flowers, donations be given in Carl’s name to the Carl Roland Athletic Foundation at 5345 Pickens Road, Powder Springs, GA 30127. Arrangements made under the caring guidance of Mayes Ward-Dobbins Funeral Home and Crematory in Powder Springs 770-943-1511

Carl Brinson Roland, 73, of Powder Springs, Georgia, passed away on October 18, 2021 after a courageous battle with Pancreatic cancer. Carl Roland was born in Chester, Georgia and was the youngest child of Myrtice Roland. Carl graduated from... View Obituary & Service Information

The family of Carl Brinson Roland created this Life Tributes page to make it easy to share your memories.

Send flowers to the Roland family.