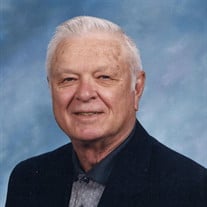 Clifford Lamar Hall, Jr. passed peacefully away on Tuesday, February 10, 2021. Lamar was born on November 8, 1935 to Clifford and Nicie Hall in Columbus, Georgia. He graduated from Childersburg (Alabama) High School where he played varsity baseball. He then went on to Auburn University, majoring in engineering and textiles. He was also in the armored tanks division of the Alabama National Guard. Lamar met his wife, Arista Ann Persons Hall, in Sylacauga Alabama and continued dating her at Auburn. Lamar graduated from Auburn and married Arista on August 31. 1957. Lamar was in sales with Pacific Engineering & Sales, traveling all over the U.S., and was one of their top salesmen. He and Arista travelled to Europe as well as the Holy Land and Prague. Lamar also traveled with the First Baptist Church to Russia and Prague as missionaries. Lamar was a Deacon and in the Men's Sunday School Class. Lamar is survived by his wife Arista of 63 years, his two adult sons, Cliff III, and wife Julie of Austin Texas; Chandler, and wife Betty of Huntsville, Alabama; his son-in-law, Russell Smith and preceded in death by his daughter, Courtney Smith. As the children grew up, the family enjoyed their various activities as well as camping, boating, and the favorite of Lamar's - Fishing and Auburn Football. Lamar was blessed with grandchildren: Brandon, Landon, Mckenna Hall; Russ, Kyle, Yates Smith; Katie Milligan and Whitney Newsom. Service will be in First Baptist Church Chapel, Marietta, at 1:00 p.m. on Sunday, February 14th. In lieu of flowers, you may choose to donate to "Grateful First", First Baptist Church, Marietta, Georgia 30064.

The family of Clifford Lamar Hall created this Life Tributes page to make it easy to share your memories.

Send flowers to the Hall family.