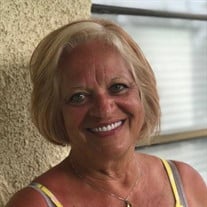 Constance Lynne Alexander was born on January 24, 1954 in Indiana, Pennsylvania. She passed away suddenly on March 11, 2021. “Connie” is survived by her daughter and son-in-law Shannon & Tim Brewer, as well as her son and daughter-in-law, Franklinn & Karina Alexander, her two dogs that she adored, her six “grandpups”, her sister Deborah Coffman, and many nieces and nephews. She was proceeded in death by her parents, three brothers and three sisters. Connie earned her Bachelor of Science in Nursing from Indiana University of Pennsylvania in 2008. This education led her to her dream career in nursing where she became a strong advocate for her patients. During her nursing career, she worked with behavioral health, rehabilitation and more recently she was extremely proud of becoming a certified stroke nurse at Kennestone Hospital in Kennesaw, GA. Anyone who met Connie knew exactly where they stood with her. You didn’t want to ask how you look in that dress, if you really didn’t want to know. Tough as nails, she expected everyone to work and love as hard as she did. Connie adored all animals, especially dogs. She would often say that she liked dogs more than people; but her family, friends and patients would say otherwise. Connie loved fiercely and deeply, if you were lucky enough to be let in. However, being on her good side didn’t mean you were immune from any tongue lashings; she would lovingly threat “you have to sleep sometime” or “I’ll knock you out.” Never one to conform, Connie was not a fan of rules, many times just making up her own rules, like her parking rule of “if your tires are in the lines then you’re fine.” Always questioning the “why?” with rules. In all seriousness, she was the most amazing mother that we could have ever lucked into and the strongest woman we’ve ever known. Her teaching of life lessons through trials and tribulations has forever molded us. Our darling “momba,” “ma” and best friend will be cherished for the rest of our lives. Endless memories will warm our souls, bring tears and forever laughter. The world will not be the same without you, we are heartbroken without our beautiful butterfly. A memorial service will be held at 2:00 p.m. on Sunday, March 14, 2021 at Mayes Ward-Dobbins Funeral Home located at 180 Church Street in Marietta, GA 30060. A memorial service will be held in Pennsylvania at a soon to be decided date.

Constance Lynne Alexander was born on January 24, 1954 in Indiana, Pennsylvania. She passed away suddenly on March 11, 2021. &#8220;Connie&#8221; is survived by her daughter and son-in-law Shannon & Tim Brewer, as well as her son and daughter-in-law,... View Obituary & Service Information

The family of Constance Lynne Alexander created this Life Tributes page to make it easy to share your memories.

Send flowers to the Alexander family.