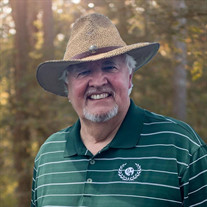 Currey Hubbard Gayle passed away peacefully on November 20, 2020, at the age of 74. He was surrounded by comfort, love and prayer in his Marietta, GA home after an aggressive cancer diagnosis. Currey fought a tough battle from previous melanoma. After two quick weeks, the cancer attacked several organs, bones, and his brain. Currey is survived by his wife of 49 years, Patricia. They have two children that they adore. Jennie Gayle (Michael) Douglas of Thomasville, GA and Rob (Kasey) Gayle of Marietta, GA. Together they gave them four grandchildren, James (age 15), Joe (age 12), Bradford (age 11), along with one granddaughter, Lynly Grace (age 15). The grandkids called him “Big”. It was a nickname that stuck, he will forever be known as BIG to everyone. It fits his personality, as he was larger than life to everyone who had the pleasure of knowing him. Currey is also survived by his brothers Joe (Sylvia) Gayle Jr, Dick (Melissa) Gayle, and sister Debbie (Isaac) Davis. Currey deeply loved all of his nieces, nephews, and married-ins. His heart loved every child in the Gayle family, and he was instrumental in keeping his mother’s (Meme) tradition alive with an annual beach trip that included 30+ family members together in 1 house. For Currey, it was always about making the memories. Currey was born in Nicholasville, KY on March 17, 1946 to proud parents Connette and Joe Gayle. In 1953 the family moved Perry, GA where they quickly became ingrained in their new home and community. In Highschool, Currey worked at the Colonial Store and was a favorite in the produce department. He lettered in basketball, football and track. In the fall of 1964, he attended Georgia Southern University. He was RN for the dorm and quickly became the best of friends with 13 gentlemen who started the Kappa Zeta Chapter of the Kappa Sigma Fraternity. In 1969, Currey was the First President Grand Master of the Fraternity. He graduated with a Criminal Justice Degree and started a job in Newman, GA as a Court Service employee. During this time, he also joined the Army National Guard until 1975. In July 1970, Currey would meet the love of his life Pat Bradford. Their love story began at a new worker training and would progress quickly. They became engaged in October and married on a snowy day on February 13, 1971. But his main calling was to become a Papa. Currey and Pat put down their roots in Marietta, GA in 1979. It’s there that they had their two children Jennie and Rob. They have been prominent members of Wesley Chapel Methodist Church for 38 years. Currey served on the MYF and SPR committees and also started the Shaw Park Youth Track Club. It was a family tradition to also run in the Peachtree Road Race. Currey was also able to volunteer for the track and field events at the 1996 Atlanta Olympics. Currey was always active in whatever sport any of children or grandchildren were involved with. Currey also had a very successful business career working in insurance industry for over 40 years with companies including SafeCo, King and Brim, Northside Insurance, Atlantic Southeastern Insurance Agency and Hardegree Insurance. He was well respected in the industry and a mentor to many. He received Agent of the Year in 2007, joined the PIA Board and became Chairman. He retired in 2017 so he could spend more time with his family and friends and enjoy some of his many hobbies. Spending time at their mountain house, Bear Hugs was a tremendous highlight, presenting Gayle Reels at various fishing conventions, and antiquing were just a few of the ways he liked to pass time. Big was always ready for a great sunset and a good bourbon. A visitation is scheduled for 4-6pm on Thursday, Dec 3rd at Mayes Ward-Dobbins Historic Chapel 180 Church Street NE, Marietta GA 30060. The Celebration of Life will take place on Friday Dec 4th. The Foxglove is located at 54 Atlanta Street, Marietta, GA 30060. The Foxglove will open at 1:00pm with the Celebration of Life starting PROMPTLY at 2:00pm. You may also watch the Celebration of Life by clicking the following link: https://fb.me/e/3Bq3vALa4 The Hilton Atlanta/Marietta Hotel Conference Center Hotel is within minutes of both facilities. For reservations please call 770-427-2500. In lieu of flowers, please send donations ONLINE to Children’s Healthcare of Atlanta Foundation (www.choa.org/tributes), select Where the Greatest Need is, In honor/Memory of Currey Gayle. It will get routed to the Children’s Daily Rehabilitation Center. If you prefer to write a check, please include the name you are making your gift in honor or in memory of, as well as the name and address of the family member you would like notified. Send the information and your check to: Children's Healthcare of Atlanta Foundation, Attn: Jacqueline Papilsky, 1575 NE Expressway, Atlanta, GA 30329 Children’s Healthcare of Atlanta is near and dear to Currey’s heart. For over 25 years, he has played Santa Claus and given gifts directly to the children. We would love to honor his tradition and continue to bring joy to these amazing kids.

Currey Hubbard Gayle passed away peacefully on November 20, 2020, at the age of 74. He was surrounded by comfort, love and prayer in his Marietta, GA home after an aggressive cancer diagnosis. Currey fought a tough battle from previous melanoma.... View Obituary & Service Information

The family of Currey Hubbard Gayle created this Life Tributes page to make it easy to share your memories.

Send flowers to the Gayle family.