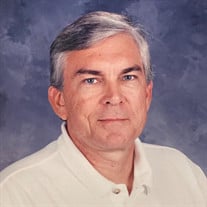 Danny Lamar Potts, 70, of Powder Springs, GA, passed away on Thursday, January 7, 2021. Danny was born in LaGrange, Georgia, on March 26th, 1950. Danny’s mother died at a young age, so he and his brother Paul were raised by his grandmother, Ruby “Nanny” Daniel who instilled in him a love of reading. After graduating from LaGrange High School in 1968, Danny briefly attended the University of West Georgia before completing his Bachelors and Masters in English Education at Georgia State University. While at Georgia State, Danny started to participate in a sport that would greatly define the rest of his life. Long-distance running quickly became one of his life’s passions as he trained for and finished many races in and around Atlanta highlighted by finishing the 1994 Marine Corps Marathon in Washington, DC where he often quipped, “I got to run with Oprah!” Danny would go on to coach high-school track and field and cross-country in the Metro-Atlanta area for more than 30 years including stints at Lithia Springs High School, Cherokee High School, Marietta High School, Sandy Creek High School, St. Pius X High School, and McEeachern High School. He was a Level II Certified Coach from the United States Track and Field Association. Along with Marietta student-athlete Christy Darden, Danny started Marietta High School’s Womens cross-country program in the fall of 1988. In 1992 he won the Jerry Frasier Award for Outstanding Coach in Mens Cross Country presented by the Atlanta Track Club. Danny was also the Georgia High School Association State Cross Country meet director for 8 years and was the first director to bring computer generated timing and results to the state meet. He has timed countless road races, track, and cross country meets throughout his career and was the owner and operator of Running Resources and Road Race Timing. He was known for his quiet nature, patience, and a wit that could bring laughter to everyone. Danny’s other passions include music, literature, nature, cooking, his family, and his German shepherd, Rosie. He is survived by his wife of 35 years, Laura Brown Potts; daughter, Michelle Harmon (Jeff) of Dallas, GA; two sons, Brian Potts (Ashley) of Portland, OR, Kevin Lamar Potts of Austell, GA; sister, Frances Potts of LaGrange, GA; four brothers Clarke Ford (Rena) of Jacksonville, FL, Paul Lewis (Diane) of Covington, GA, James Potts of McDonough, GA, John Potts (Maria) of Helena, MT; four grandchildren, Zoe, Sophie, Aiden, and Maddie Harmon; several nieces and nephews. No services are being held at this time, and in lieu of flowers, please donate to the newly formed Coach Danny Potts Scholarship intended to sponsor in-need high school cross-country runners to attend Asheville Distance Running Camp in Asheville, North Carolina, a place he loved so much. Please visit https://www.gofundme.com/f/danny-potts-memorial-running-camp-scholarship to donate. Arrangements made under the caring guidance of Mayes Ward-Dobbins Funeral Home and Crematory Macland Chapel in Powder Springs (770)943-1511 www.mayeswarddobbins.com

Danny Lamar Potts, 70, of Powder Springs, GA, passed away on Thursday, January 7, 2021. Danny was born in LaGrange, Georgia, on March 26th, 1950. Danny&#8217;s mother died at a young age, so he and his brother Paul were raised by his grandmother,... View Obituary & Service Information

The family of Danny Lamar Potts created this Life Tributes page to make it easy to share your memories.

Send flowers to the Potts family.