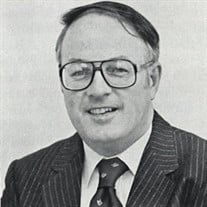 Born July 21, 1937 in Atlanta, GA, Donald Eugene Huie died on December 29, 2021. He grew up in College Park, GA on the family farm alongside his 5 brothers, including his twin, Douglas Foster Huie as well as his uncle, the late Stace Huie. Don was a 1955 graduate of Jonesboro High School where he was involved in sports, including football and baseball, and was a 1959 graduate of Georgia Tech. Following college, Don served in the Air National Guard before joining Lockheed as an engineer. This is where he met his wife, the former Claire Dempsey, from Peachtree Hills in Atlanta, GA. The two married on September 5, 1964 and recently celebrated their 57th anniversary. Don obtained his law degree at John Marshall Law School in Atlanta and worked many years as a real estate salesman and broker. As many can attest, Don was the family comedian - very outgoing and never met a stranger. He was always ready with a joke or a story to make a person laugh. Growing up, Don and his twin, Doug, enjoyed playing good-natured pranks on people where one would pretend to be the other. But his most important quality was his quiet generosity. He never hesitated to step up to help when needed. Don was a dedicated fan of the Georgia Tech Yellow Jackets and thoroughly enjoyed being active in his children’s lives. In his later years, he loved watching his grandson play football and his granddaughter on the soccer field. Don is preceded in death by his parents, William Huie and Lillian Middlebrooks Huie, brothers Bill (and wife, Dorris), Joseph and John, sister-in-law, Sandy, brother-in-law Glenn Brinson, and niece, Melodie Huie Tamm. Survivors include his beloved wife, Claire, children, Donald Huie, Jr., Robert Stace (Chad) Huie and partner, Kim Ladany, and Holly Huie Bradford (Bill), grandchildren Rhodes and Samantha Bradford, brothers James and Doug, and sisters-in law, Jeanne Huie, Diane Huie and Ernie Brinson as well as many nieces, nephews, and extended family members. The family will receive friends for visitation from 12:00-2:00 PM on Thursday, January 6th at Mayes Ward-Dobbins Funeral Home, 3940 Macland Road, Powder Springs, GA 30127 followed by a Funeral Service. There will be a small graveside service for the family at 2:00pm on Friday, January 7th at the Pleasant Grove Methodist Church Cemetery in Riverdale, GA. The family asks that in memory of their brother, father, grandfather, uncle and in-law, you remember a time when Don made you smile.

Born July 21, 1937 in Atlanta, GA, Donald Eugene Huie died on December 29, 2021. He grew up in College Park, GA on the family farm alongside his 5 brothers, including his twin, Douglas Foster Huie as well as his uncle, the late Stace Huie.... View Obituary & Service Information

The family of Donald E. Huie created this Life Tributes page to make it easy to share your memories.

Send flowers to the Huie family.