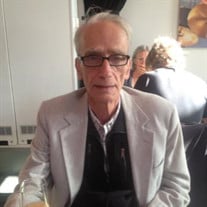 April 7, 2020: What is the day that Jeopardy lost one of its most steadfast home viewers. Edward John Pozniak was born to John and Ethel Pozniak on September 17, 1941, in La Crosse, Wisconsin. He grew up in Chicago, Illinois, with his younger brother Dick; they were one year and two days apart. By the recommendation of a teacher, Ed took a test and qualified for a scholarship to Illinois Institute of Technology, where he graduated with a degree in biology. Post graduation, Ed enlisted in the Army and served two tours in Vietnam. Ed served his country for nearly 25 years as a chemical staff officer on bases from Fort McPherson to Fort Riley to Yongsan Garrison in Seoul, South Korea. LTC Pozniak retired from active service in 1988 and settled in Marietta, Georgia, with his family. For his second career, Ed worked at Georgia Tech in the Department of Environmental Health & Safety for 30 years until January 1, 2019. Ed was an active member at Covenant Presbyterian Church for over three decades - often the first to arrive to unlock the building for Sunday services, participating in church potlucks, and teaching Sunday school (his Biblical Jeopardy was very popular). To his daughters Catherine and Eileen, Dad was a devoted and loving father who set high expectations, but never casted judgement; fostered independence while always reminding his girls to call if they ever needed him to bail them out of jail (which - thankfully - he never had to do), and encouraged them to fail at something hard rather than excel at something easy. He was an enthusiastic Sports Dad to Eileen, always to be found on the field during softball practice, coaching in the dugout during games and, during high school, cheering on the volleyball sidelines. Dad dutifully showed up to our school events and presentations across four decades, culminating in Catherine’s doctoral defense. He also purchased a badge’s worth of her Girl Scout cookies every year and built the set for a middle school production of The Wizard of Oz. Ed was an avid reader, juggling three books at a time in his heyday (one fiction, one non-fiction, one “junk” novel) and shared his love of reading with his daughters. For many years, Reader’s Digest was highly in demand in the Pozniak household. Ed was kind, funny, and always put others first. He spent Saturday mornings working on logic puzzles, could list all of the U.S. presidents and vice-presidents, and drank old-fashioneds. His integrity was offended by people who save spots in lines for others, believed firmly that you should only pack as much as you can carry, and prided himself on passing out good Halloween candy. Ed enjoyed lighting up the house at Christmas, ultimately owning dozens of strings of Christmas lights - the more garish and brightly colored, the better. Inside he had an extensive Christmas village that he set-up with pleasure each year and a collection of holiday music on vinyl, never quite making the switch to CDs. As agreed to with a Higher Power, Ed lived long enough to see the Chicago Cubs win the World Series. Dad was loved, admired, and will be dearly missed. Ed leaves his two daughters, Catherine and Eileen; his brother Richard Pozniak (Julie); nephew and nieces Edward, Joelle (Don), and Suzanne; and his uncle Leon Wiskup (Dorothy). Given the circumstances, family and friends can stream the service, which will be held at 12 PM (noon) Eastern Daylight Savings Time (EDT) on Tuesday, April 14. Access to the video feed will be available on this page of the Mayes Ward-Dobbins website at the time of the service. We will bring Dad to Covenant Presbyterian Church for one final time on Wednesday, April 15. Burial with military honors will follow at the Georgia National Cemetery. In lieu of flowers, contributions may be made to the Edward J. Pozniak Memorial Science Fair Fund ( https://www.gofundme.com/f/edward-j-pozniak-sciencefair-fund ) . The fund will support science fair projects for students on the Rosebud Reservation in South Dakota.

April 7, 2020: What is the day that Jeopardy lost one of its most steadfast home viewers. Edward John Pozniak was born to John and Ethel Pozniak on September 17, 1941, in La Crosse, Wisconsin. He grew up in Chicago, Illinois, with his younger... View Obituary & Service Information

The family of Edward John Pozniak created this Life Tributes page to make it easy to share your memories.

Send flowers to the Pozniak family.