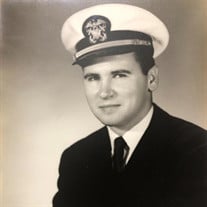 Judge Hugh Robinson, Veteran. Nephew Stephen Robinson, of Freehold, New Jersey, says of his Uncle Hugh, “He was the son of Irish immigrants. He rose from very simple and humble beginnings to being the first member of his family to receive a college (and post-graduate) degree. He lived a full life given he travelled the world while in the NAVY, Merchant Marine, served his country as an FBI agent and later as a Federal Judge and local Magistrate. He left his mark on the world and I’m so very fortunate to have benefited from his wisdom and advice. He’ll be very much missed by his family”. Born September 25th, 1937 and died March 29th, 2020 at age 82 at Kennestone Hospital from COVID-19, Coronavirus. Hugh and his brother William were raised in a small apartment in the Greenpoint section of Brooklyn, New York by their parents Elizabeth & Hugh. His mother was from County Cork, Ireland and his father from Belfast, Northern Island. They met in the United States where they both had immigrated. He attended Brooklyn Tech High School and went on to SUNY (State University of New York) Maritime College. He served his country as an officer (LTJG) in the US Navy. After the US Navy he worked for American Export as a Merchant Marine officer; his father was also a merchant mariner in Ireland. Later he went on to St John’s University, in Queens NY, for his Law Degree and this is where he met his future wife Dorothy, who he would marry, move to Georgia with, and she would become the first female Judge of a Court of Record in the history of the State of Georgia here in Cobb County. After receiving his Juris Doctorate from St John’s University, he was accepted into the FBI. He was first posted in St. Louis and later transferred to Atlanta. He and his wife Dorothy built a house on top of the hill off North Saint Mary’s Lane in Marietta where they lived from 1977 to 2018 when she died. Hugh then moved into a small apartment which reminded him of his childhood. He worked for a time as a corporate lawyer for an insurance company, and then joined the Atlanta Law firm of Green, Buckley, Dereaux, and Jones. Later, he was appointed to a Federal bankruptcy judgeship in the U.S. District Court of the Northern District of Georgia. He also taught as an adjunct professor for a law school. After retiring from the Federal bench he served as an Associate Magistrate Judge for Cobb County. He was a student of History and could answer any question about civilizations, monarchs, dictators, invasions, regimes and epochs. He was an avid sailor and loved all things by the water including fishing when he could with his older brother, William who lived in Jackson, New Jersey. He travelled the world with Dorothy and they always had two Collie dogs. They had no children of their own. Hugh was a member of Saint Joseph’s Catholic Church in Marietta, Georgia. Most of all he was a kind and gentle man to his brother, nephew Stephen (wife Lynda) and Stephen’s two children Jessica and Stephen who looked upon Hugh as a second grandfather. He remained very engaged as to their activities and plans for the future. A Public Visitation will be held from 2:00 p.m. till 3:00 p.m. on Wednesday, May 19, 2021 at Mayes Ward-Dobbins Funeral Home, Historic Marietta Chapel.

Judge Hugh Robinson, Veteran. Nephew Stephen Robinson, of Freehold, New Jersey, says of his Uncle Hugh, &#8220;He was the son of Irish immigrants. He rose from very simple and humble beginnings to being the first member of his family to receive... View Obituary & Service Information

Due to COVID-19 Services will be announced at a later date.