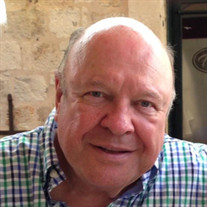 John Hackett Martin, 82, of Marietta, GA. passed away on Thursday, September 16, 2021. A memorial mass will be held at 11:00 a.m. on Saturday, September 25th at Saints Peter & Paul Catholic Church in Decatur with Rev. Fr. Bryan Small and Rev. Fr. Neil Dhabliwala officiating. The service will be live-streamed via the Church's website, https://ssppatl.org/livestream -Face masks will be required for those attending in person. Interment will be in the columbarium at All Saints Catholic Church, Dunwoody. Life for John started in Two Rivers, WI in the Spring of 1939. He grew up as the spitting image of his father, a local doctor. He was raised there with his sister, Ellen, his mother, Catherine and his second mother, Imelda. Long before the creation of cell phones and GPS, he loaded up his Nash Rambler and drove south to the University of Miami to study Film. While at the University of Miami, he met Maria who fled from Cuba with her family. They fell in love, married, moved to New York and he began an award-winning career at NBC. He started as a Page and made his way to becoming a Film Editor. While in New York, John became a father to Susan and then Peggy. John’s career at NBC took him, Maria and the girls to Chicago. He transitioned from editing film to editing video tape. While working at WMAQ/Channel 5, his work was recognized by many Emmy Awards. He was incredibly proud of his career and considered his work an art. John continued his love of editing until the day he died making videos for their community and for many friends. Space exploration was one of John’s fascinations. At a young age John looked to the stars through a telescope his father built in their home. It started his passion for space exploration. A crowning achievement of his film career, a film about the Moon, is in the Library of Congress. John also loved singing and joined choirs from his time at the University of Miami, the Glenn Draper Singers, Michael O’Neill Singers, and many other church choirs. John’s greatest love was saved for his family. In retirement, he and Maria moved to the Atlanta area to live near their daughters and their families. Mr. Martin is survived by his loving wife, Maria Valiente Martin; daughters, Susan Bunda (Jim) and Peggy Stecker (Aaron); grandchildren, Alex Bunda, Casey Howse (Trevor), Adam Stecker, Nina Stecker, Ben Stecker; sister, Ellen McDonald (Jim); nieces, Jane Leslie (John) and Mary McDonald. He is also survived by his extended family. In lieu of flowers contributions can be made in Honor of John Hackett Martin to St. Jude Children’s Hospital.

The family of John Hackett Martin created this Life Tributes page to make it easy to share your memories.

John Hackett Martin, 82, of Marietta, GA. passed away on Thursday,...

Send flowers to the Martin family.