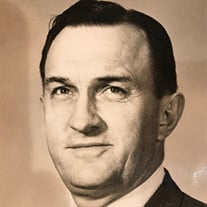 J. Paul Poston, former Textile Manager for J. P. Stevens Co. died October 8, 2020 in Marietta. He was born August 20, 1926 in Florence County, SC. He grew up on a tobacco farm and was the sixth of ten children of Mack K. and Eulee Greenwood Poston. Paul was educated at Johnsonville High School and received a BA degree in Business Administration from Wofford College in 1953. He did further study at the University of South Carolina. Paul was drafted into the Army at age 18 during World War II and served in the Philippine Islands and Japan. He received a Unit Citation for Military Perfection from General Dwight D. Eisenhower on May 13, 1946. Following graduation from Wofford he chose textiles as his career and worked for several prominent companies including Stevens, Milliken, and Springs. His work consisted primarily of building new plants or refurbishing and modernizing older unprofitable plants. His last position was co-owner of American Mills in Jackson, Tennessee. Paul was a member of Buncombe Street United Methodist Church since 1991 and he was an active Methodist for over seventy years. He served in numerous positions including teacher, Superintendent of Sunday School, Chairman of Administrative board, Chairman of Trustees, and Building fund Chairman. He was a Director of the American Red Cross, President of the Lion’s Club, Trustee of the Montgomery Memorial Hospital in Troy, NC, Director of the Optimist Club, a Boy Scout leader, a CPR instructor, and he was a Mason. In 1973 he was named in “Who’s Who in the South”. In retirement he authored a book entitled “The Land Between the Rivers” which is a collection of memoirs about growing up in Florence County, SC during the 1930’s and 1940’s. While Paul had many professional accomplishments, he was most proud of the loving family that he created with his beloved wife, Leta Poston. Paul was preceded in death by Leta, the love of his life for 72 years. Survivors include two sons, Wayne Poston and Stan Poston, and one daughter, Annie Poston Cook, along with four grandchildren and two siblings, Jerry Poston and Virginia Chinnes. Memorials may be made to Buncombe Street United Methodist Church in Greenville, SC or to Wofford College in Spartanburg, SC. A graveside service will be at Trinity Methodist Church in Johnsonville, SC on Friday October 16 at 2:00.

J. Paul Poston, former Textile Manager for J. P. Stevens Co. died October 8, 2020 in Marietta. He was born August 20, 1926 in Florence County, SC. He grew up on a tobacco farm and was the sixth of ten children of Mack K. and Eulee Greenwood... View Obituary & Service Information

The family of John Paul Poston created this Life Tributes page to make it easy to share your memories.

Send flowers to the Poston family.