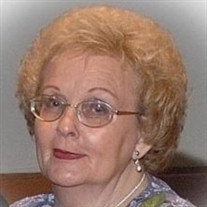 Mary Lou Carruth Harris was born in Lake Worth, FL on 11-30-1930 and passed on to life eternal with the Lord on 11-14-2020 in Marietta, GA at the age of 89. She was just two weeks away from being 90! She grew up in Holly Hill, Florida, but then spent most of her years in Athens, Georgia where she went to school, and later attended UGA for a year where she loved playing the pipe organ at the University. She was a big Georgia Bulldog Fan! She was a member of Tuckston Methodist Church in Athens for years. She moved to Marietta after marrying her husband, Edsel Lenton Harris on August 18, 1951. She worked at Lockheed Martin for a few years until 1959, was a member of the Egg Art Guild of Georgia where she made hundreds of beautiful creations out of eggs. In her early years of marriage she was an avid seamstress and created beautiful garments for her family. She loved her bush roses and Wallace’s Barbecue. She also faithfully served St. Stephen United Methodist Church in Marietta as their organist/pianist for over 50 years and was a member for 60 years. She also played and directed the hand bell choir. She loved music and it was a huge part of her life. She is survived by her two daughters, Vicki Turner with her husband, Stan Turner, and Pamela Lowe with her husband, Tommy Lowe, as well as three grandchildren, Kelly Davis, Brandon Lowe and Bethany Ryan, and one great-grandchild, Luke Jeffrey Davis. Her husband, Edsel Lenton Harris, preceded her into life eternal in 2011. She is the first of her siblings to leave and is survived by her brother, Edwin Carruth, and a sister, Jean Cason. Her parents were Elbert Arnold Carruth and Edwina Victoria Peterson Carruth.

The family of Mary Lou Carruth Harris created this Life Tributes page to make it easy to share your memories.