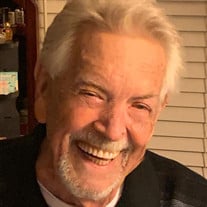 Paul Alexander Jones, Jr, 84, of Powder Springs, GA. passed away on Wednesday, May 27, 2020 and is now in the presence of his Lord and Savior, and is at eternal rest. A Memorial Service and dinner will be held at 1:00 PM on Saturday, May 30, 2020 at the Jones family residence – 5211 Old Mountain Court, Powder Springs, GA. 30127. Paul is survived by his loving wife of five years, Helene Jones, of Powder Springs, GA.; his son Scott Allen Jones of Hiram GA.; his daughter Jennifer Styers of Orange City, FL.; his step daughters Kim Pace(Dwayne) of Dallas, GA., Tina Burnett(Win) of Villa Rica, GA., and Amanda Pruitt(Josh) of Dallas, GA.; his 12 grandchildren and one great-granddaughter. He is preceded in death by his wife of 55 years, Shirley Perkins Jones, and his parents Paul Jones, Sr. and Bessie Baker Jones. Paul was born on December 16, 1935 in Lansing, Michigan. He was a 1953 graduate of Fitz Gerald High School. Paul proudly served his country in the U.S. Army from 1954 to 1958, as a paratrooper in the Korean War. He began his military career in the 11th airborne division and later went to the 508 airborne regimental combat team in Japan. He then served with the 101st Airborne Division at Fort Campbell. Paul was also very successful in all of his business endeavors. He was the owner and founder of Sun International in Fort Lauderdale, FL. His career allowed him to travel and see the world. Paul was adventurous and always looked for new opportunities to enjoy life. He held a black belt in Judo, rode motorcycles in his spare time, and was a member of various clubs that benefited his community. The most important thing in Paul's life was his commitment to God. He loved attending Dallas First Assembly. A visitation will be held on Friday, May 29, 2020 from 5:00 PM to 7:00 PM at Mayes Ward-Dobbins Funeral Home in Powder Springs, GA. The family has requested in Lieu of flowers that donations be made in Paul’s name to Shepherds Rest Ministries Inc. Donations can be sent to P.O. Box 737 Dallas, Ga. 30132 Arrangements made under the caring guidance of Mayes Ward-Dobbins Funeral Home www.mayeswarddobbins.com 770-943-1511

Paul Alexander Jones, Jr, 84, of Powder Springs, GA. passed away on Wednesday, May 27, 2020 and is now in the presence of his Lord and Savior, and is at eternal rest. A Memorial Service and dinner will be held at 1:00 PM on Saturday, May 30,... View Obituary & Service Information

The family of Paul Alexander Jones, Jr. created this Life Tributes page to make it easy to share your memories.

Send flowers to the Jones, family.