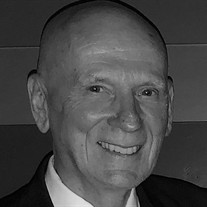 Pastor Richard Fulton took his last steps home to be with His Lord in the early morning hours Sunday, March 20, 2022. A Funeral Service will be held at 2:00 PM on Saturday, March 26, 2022, at White Oak Springs Baptist Church with Pastor Keith Lee officiating. Richard was born November 5, 1944, in Flint, Michigan and born again Easter Sunday, April 29, 1969. He led his family faithfully and obeyed the Lord’s call into ministry in 1976, leading him to Baptist Bible College East in Shrub Oak, New York. It was there he heard the call to plant an Independent Baptist Church in Fairfield, Connecticut in 1980. After 11 years there, Rich and his family were called to Ireland as missionaries and served there for the next 17 years. When the need arose to look after his mother-in-law, Granny Eggie, or “I” as Rich affectionately called her, Rich and Linda returned to the States, moving to Dallas, Georgia in 2006 and planting roots there. Richard served as Assistant Pastor at White Oak Springs for 3 years and remained a faithful member of the congregation until he breathed his last, entering into the great cloud of witnesses to be an encouragement to the believers he leaves behind. The great passion of his life was to win inmates to Christ, which he did through Rock of Ages ministry for the last seven years. When loved ones would call to see where he was or how he was doing, he more often than not responded with, “I’m in prison.” Countless inmates attribute their salvation to the fact that he was. Rich was a faithful husband, father, grandfather, and great-grandfather. He was loving and devoted to anyone blessed enough to call him friend, a countless number in his 77 years. He is remembered for his love for His Lord and Savior, his family and friends, blue Powerade, and mowing his lawn with his zero-turn radius mower. He could often be found preaching in his best suit and tie, tinkering with a computer, or playing pickleball. He was a fun-loving, competitive man, insisting even to his last days that he could beat his children in a footrace. He has now finished that race, fought the good fight, and left a witness that will reach long beyond his earthly years. Richard is survived by Linda Lou, his loving wife of 60 years, his four children Jan, Jerry, Joe, and Debi, sons-in-law Bob and Kevin, daughters-in-law Kelly and Colleen, 15 grandchildren, and 6 great-grandchildren. He is also survived by older brother Norm and sister-in-law Carolyn. He is preceded in death by his parents, Vernon and Gwendolyn and beloved in-laws Otis and Irene. The Fulton family will receive friends for visitation at the church one hour prior to the service. In lieu of flowers, the family requests that donations be made to White Oak Springs Baptist Church’s Roof Fund.

Pastor Richard Fulton took his last steps home to be with His Lord in the early morning hours Sunday, March 20, 2022. A Funeral Service will be held at 2:00 PM on Saturday, March 26, 2022, at White Oak Springs Baptist Church with Pastor Keith... View Obituary & Service Information

The family of Richard Alan Fulton created this Life Tributes page to make it easy to share your memories.

Pastor Richard Fulton took his last steps home to be with His...

Send flowers to the Fulton family.