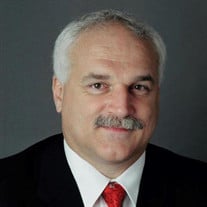 Richard J. Luisi, 68, of Marietta, GA, passed away peacefully at home on April 4, 2022, after a long illness. Rich was born and raised in North Plainfield, NJ. A graduate of North Plainfield High School, he attended Newark State College (now Kean University) for a year while working part time at Electrolux Corporation as a door-to-door sales representative to pay his tuition. He was so successful in direct sales that he decided to leave college and devote himself to building a career with Electrolux. Due to his determination and unfailing optimism, he became the ultimate salesman. Over a period of 18 years, he amassed a customer base of over 35,000 people. During that time, he was the National Sales Champion at Electrolux five times. His success and natural leadership ability led him into management, where he quickly progressed through the ranks, holding every position in the sales department from salesman to Executive Vice President of Sales, North America, a position he held for twenty years. His career at Electrolux (presently Aerus) spanned more than 50 years. During his tenure, he put together a team that carried out many positive changes in the company, including converting hundreds of retail branches to franchises, and helping to add air and water purification to the product line. Rich’s accomplishments extended beyond his own personal success to supporting the growth and success of others. His leadership skills earned him the respect of many of those whose lives he touched and mentored over the years. He believed in setting an example of hard work and going the extra mile. He was generous with his praise of others—nothing was more gratifying to him than seeing them achieve their goals. Traveling the world on Electrolux/Aerus trips and conventions with his wife Janet was one of the many rewards for his hard work. He won trips every year to well over thirty countries and great destinations in the U.S. He was especially proud of being 100% Italian and loved to visit Italy. Along with travel, Rich loved fishing, golf, baseball, nature, participating in the Boy Scouts of America as an Assistant Troop Leader, and working on projects at home. But most of all, Rich was a devoted family man. He would have given anything for more years to spend with them. He was predeceased by his parents, Joseph C. Luisi and Nancy Luisi (nee Palocce). He is survived by his wife, Janet Groves Luisi, son David Luisi, daughter-in-law Wen Qin, brothers Joe and Tom, nephew Joseph and fiancé Justine, plus Aunt Linda, Aunt Eileen, and many cousins. The family wishes to give special thanks to Raymond A. Rubin, MD for his skillful and compassionate care over the years. There was a private family burial. A celebration of life service will be held on Monday, April 25 at Mayes Ward-Dobbins Funeral Home, 180 Church Street, Marietta, Georgia. Visitation will be from 10:00–11:00 A.M. followed by a service at 11:00 A.M. A reception will follow at The Whitlock Inn, 57 Whitlock Ave SW, Marietta, GA. In lieu of flowers, the family requests a donation to the Mason Transplant Clinic at Piedmont Hospital, Capstone Hospice, or your local blood bank.

The family of Richard J. Luisi created this Life Tributes page to make it easy to share your memories.