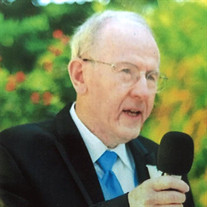 Robert John Englar, 76, of Marietta, Georgia passed peacefully surrounded by family on Monday, March 29, 2021. He was born on May 25, 1944 in Baltimore, Maryland. Robert was predeceased by his parents Jack Donald Englar and Edith Lucille Blackwell Englar. He is survived by his wife, Sandra Little Englar, of 50 years of marriage; sons, Robert Jefferson Englar and wife Erin of Cummings, Georgia, Michael Jason Englar and wife Naomi Summer of New Orleans, Louisiana; grandchildren, Robby Emerson Englar and Elizabeth Emmalaine Englar and Evelyn Vonne Englar; brothers, John David Englar and wife Linda of Greensboro, North Carolina, and Richard Douglas Englar and wife Jill of Westminster, Maryland; nieces and nephews Ryane, Brent, Kevin, Scott, and Brian. Robert “Bob” graduated from Franklin High School in Reisterstown Maryland, Class of 1962. Following graduation, he earned a Bachelor of Science in Aerospace Engineering in 1967 from Virginia Polytechnic Institute in Blacksburg, Virginia. He was an Arrow of Light in the Boy Scouts, served in the Virginia Polytechnic Institute ROTC guard and completed a co-opt internship with the U.S. Navy. He obtained a Master’s of Sciene in Aerospace Engineering in 1973 from the University of Maryland. Bob worked for the Department of Navy, followed by the David Taylor Naval Ship Research and Development Center in Carderock, Maryland, followed by Lockheed Martin in Marietta, Georgia, and Georgia Institute of Technology Research Institute. Bob was a Principal Research Engineer at the Georgia Tech Research Institute (GTRI) and has over 44+ years of experience in aerodynamic research, much of it Circulation Control related, advanced concept development, and experimental techniques. As Principal Research Engineer in the Aerospace & Acoustics Technologies Division of GTRI’s Aerospace, Transportation & Advanced Systems Laboratory, Bob was responsible for research project direction and development of advanced technologies in aerodynamics. After conducting aero research during employment with the U.S. Navy and Lockheed Martin, he originated, conducted and/or directed over 134 such sponsored research programs at GTRI since January 1989. He was Principal Investigator leading a NASA program on Circulation Control Aerodynamics for Subsonic Fixed-Wing Aircraft and a Co-investigator on a NASA program on pneumatic Powered Lift Aircraft. He holds 11 patents and 19 invention disclosures on these advanced concepts and has published 209 papers and technical reports on these and other research projects. He also taught Senior design courses in the Georgia Tech Aerospace Engineering and Mechanical Engineering Schools. He was an Associate Fellow of the American Institute of Aeronautics and Astronautics (AIAA) and was a founding member of the original AIAA Applied Aerodynamics Technical Committee. He was elected AIAA Young Engineer/Scientist of the Year for his work on CCW, has received numerous professional awards at DTNSRDC, Lockheed and GTRI, and has lectured on the subject of powered lift and advanced concepts to government agencies, technical societies, private industry and universities. His specialty was combining this advanced aerodynamic research and development experience into design, verification and of Circulation Control and pneumatic high-lift and control systems which can be employed on efficient Short Takeoff & Landing (STOL and Extreme STOL) and high-performance aircraft. He was elected as a GTRI Technical Fellow based on his involvement with advanced aerodynamics and related advanced concepts. He led the development of advanced CCW airfoils and other pneumatic concepts, including full-scale flight testing of the A-6/CCW STOL Demonstrator aircraft. He led the Department of Energy Blowing on Heavy Duty Vehicles program, Formula One Panoz racing team and the Formula One Aeros racing team of Sir Jack Brabham, and Miss Budweiser hydroplane aerodynamics research. Bob retired from GTRI in January 2013 but continued to act as Advanced Aerodynamics Consultant up until till death, particularly in the development of advanced pneumatic aerodynamic technologies for ground and water-based vehicles (some commercial or high-performance, racing) as well as advanced STOL and high-performance aircraft. He led the revival of the Willard Custer Channel Wing for wind tunnel experiments directing airflow, a study that was funded by NASA and for which he was featured in Air & Space Magazine, and recently co-authored the book “History of the Channel Wing” with Joel Custer, the grandson of the original developer, Willard Ray Custer. He also worked as a consultant on the X-plane project DARPA – CRANE (Defense Advanced Research Projects Agency – Control of Revolutionary Aircraft with Novel Effectors).

Robert John Englar, 76, of Marietta, Georgia passed peacefully surrounded by family on Monday, March 29, 2021. He was born on May 25, 1944 in Baltimore, Maryland. Robert was predeceased by his parents Jack Donald Englar and Edith Lucille Blackwell... View Obituary & Service Information

The family of Robert John Englar created this Life Tributes page to make it easy to share your memories.

Send flowers to the Englar family.