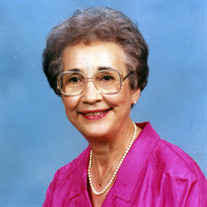 Ruth Sisk Pleak, 89, of Marietta died October 7, 2016. Ruth was born January 7, 1927, in Toccoa, Georgia. She was the daughter of Theodore Sisk, Sr., and Lena Smith Sisk. Throughout her early years, Ruth sang in the Sisk Family gospel quartet along with her parents and younger brother, Ted. She attended Toccoa High School and North Georgia College. After her college days, she moved to Atlanta to take a job at the VA, where she met Paul Pleak. They married in 1946 and then moved to the campus of Georgia Tech, where they lived while Paul earned his engineering degree. In 1951, he took a job with Lockheed, and they settled in Marietta to raise a family, which grew to include 3 children. They lived in Smyrna, Marietta, and East Cobb for the next 36 years. During this time, Ruth was active at Powers Ferry Methodist Church, where she sang in the choir and taught Sunday School. She worked for the Cobb County Public Library System for many years, most of that time as manager of the East Marietta Branch Library. In the mid 1980s, Paul and Ruth retired and moved to the mountains of North Georgia, where they enjoyed visits from friends and family, especially from their six grandchildren, in the home they called “The Owl's Nest” in honor of Ruth's collection of owls. They lived in Blairsville for 27 years and were active at Sharp Memorial Methodist Church in Young Harris. Always an avid reader and enthusiastic learner, Ruth volunteered at both their church and public libraries, and Ruth and Paul enjoyed attending Elderhostel classes. In 2014, Ruth and Paul moved back to Marietta to live at Winnwood Retirement Community. Ruth is survived by Paul, her husband of 69 years; by children Cathy Brown (and husband Chris), Peggy Cooley (and husband Keith), and David Pleak (and wife Susan); by grandchildren Matt Brown (and wife Christy), Lara Cooley, Stephen Brown (and wife Deanna), Bryan Cooley (and wife Danielle), Andrew Pleak, and Ben Pleak; by great-granddaughters Charlotte Brown and Ellie Brown; and by her brother, Ted Sisk, of Lexington, Kentucky. The family wishes to thank our friends at Winnwood for their kindness and support during Ruth's illness. A funeral service will be held at St. James' Episcopal Church in Marietta at 2:00 p.m. on Saturday, October 22. The family will receive visitors at 1:00 p.m. at St. James' on the day of the service. Mayes Ward-Dobbins Funeral Home is in charge of arrangements. In lieu of flowers, donations may be made to the Salvation Army, 306 East Franklin Street, Toccoa, GA 30577. www.mayeswarddobbins.com 770-428-1511

The family of Ruth Sisk Pleak created this Life Tributes page to make it easy to share your memories.

Send flowers to the Pleak family.