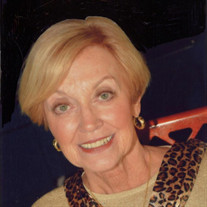 Sharon Lee Malone Herndon passed away with her family by her side on April 17, 2021. Sharon was born on July 8, 1941 in Milwaukee, Wisconsin. She was the daughter of Florence Marie Tellier Malone and Andrew Clemmons Malone Jr. Sharon grew up in Murfreesboro, Tennessee, where she graduated from Middle Tennessee State University with a Bachelor of Science degree in Business Education and English. Sharon married David Lee Herndon on August 12, 1967 in Murfreesboro, Tennessee. Sharon began her teaching career at White House High School just north of Nashville, Tennessee. After teaching Business Education there for two years, she moved to Marietta, Georgia, where she was on the original staff at Wheeler High School, which opened in 1965. Sharon sponsored Future Business Leaders of America (FBLA) where she had a state officer and took many students to National FBLA competitions during her 30 years at Wheeler. Sharon served as PTA President at Hollydale Elementary School and chair of several committees while her daughters attended there. After retiring from teaching in 1995, Sharon soon became an employee of Cobb County government. Working in Magistrate Court, she worked with the newly formed Drug Court. She was promoted to Mediation Coordinator, working weekly with mediators from the metro area. Later, she accepted the position of Chief Deputy Clerk in Magistrate. In 2001, Sharon moved to State Court of the Criminal Division. Later that year, she was promoted to Judicial Administrative Specialist for the Clerk and Chief Deputy Clerk. Sharon retired in 2011 from Cobb County Government. Sharon loved being a republican and working in local politics. She was an active member of Cobb County Republican Women’s Club, where she served as Vice President, Recording and Corresponding Secretary, Hospitality Chair and Scholarship Chair. She assisted with many campaigns for Cobb GOP. She was also a member of Georgia Federation of Republican Women. 2 Sharon had a brief bout with breast cancer when she was 50. The experience had such an impact on her that she was led to action to work with the American Cancer Society. She served on the Swordsman’s Ball Silent Auction committee for over 15 years and enjoyed walking with her daughters in the Susan G. Komen Race for the Cure for 10 straight years. Having two daughters and a son-in-law who had graduated from the University of Alabama, she was an avid fan of the Crimson Tide. She had a house full of plants. She loved to travel; she and her husband took many cruises and worked on mission trips for several years. One of their last cruises was to the Holy Land. She was a woman of faith and was a long-standing member of Roswell Street Baptist church. She loved animals, especially the many boxers she had over the years. Etiquette was important to her which she instilled in her family. She is survived by her husband of 53 years, David Lee Herndon, their daughters, Alicia Kay Herndon Lyles and Lee Alison Herndon Rable, sons-in-law, Joseph Bradley Lyles and Gregory John Rable; granddaughter Alexandra Hope Lyles; grandsons, Carlson Malone Lyles, Connor John Rable and Landon David Rable; sister-in-law, Roberta Herndon Byrd, and brother-in-law, Ronald Byrd. The viewing will be held on Wednesday, April 21st from 5-7pm and the funeral service will be at 2pm on Thursday, April 22nd, both at Mayes Ward-Dobbins Funeral Home. Burial will follow the funeral at Cheatham Hill Memorial Park. In lieu of flowers, donations may be made to the American Cancer Society.

Sharon Lee Malone Herndon passed away with her family by her side on April 17, 2021. Sharon was born on July 8, 1941 in Milwaukee, Wisconsin. She was the daughter of Florence Marie Tellier Malone and Andrew Clemmons Malone Jr. Sharon grew up... View Obituary & Service Information

The family of Sharon Malone Herndon created this Life Tributes page to make it easy to share your memories.

Sharon Lee Malone Herndon passed away with her family by her...

Send flowers to the Herndon family.