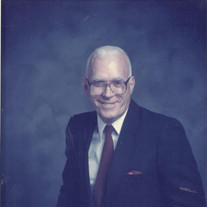 Thomas John Gronberg passed away at Emory Hospital on October 6, 2020. A Funeral Service will be held on Wednesday, October 14, 2020 at 11 o’clock at Mayes Ward-Dobbins Macland Chapel in Powder Springs with Rev. Barry Lancaster officiating. Thomas will be interred at Georgia National Cemetery. Thomas was a DIY kind of guy and loved making something useful from junk. He was frugal and believed in living below your means. He loved the great outdoors, boating, fishing, and hiking. He kept his boat, for many years, on lake Allatoona. He had a particular place in his heart for Big Lake in Maine. He was a member of the Retreads Hiking Club in West Cobb County. He participated for many years in the activities at West Cobb Senior Center. He was a member of the Lockheed Management Club and met regularly with other Lockheed retirees locally. He was a member of the Computer and Automated Systems Association and the Society of Manufacturing Engineers. He supported Kennesaw State University School of Music, Georgia Symphony Orchestra, Atlanta Lyric Theatre and many other local theatrical/musical venues. Thomas J. Gronberg was born on September 15, 1931 in New York, New York. He was raised in Queens County, NY with a great bunch of lifelong friends. He attended P.S. 148 and graduated from New York Town Highschool in 1949. He enlisted in the USAF in 1951 to serve in the Korean War. He was honorably discharged in 1955 after obtaining an excellent technical education in multi-engine jet bomber systems. He was employed briefly on a short-term project by British Overseas Airways in New York. He then started his career with Lockheed in Marietta, GA after serving 35 years in different roles for Lockheed, he retired in 1990 as Senior Manufacturing Engineer. During his employ at Lockheed he attended the University of Georgia and Georgia State University. Thomas is survived by one child, Steven E. Gronberg and his wife Linda Gronberg. He is also survived by his son-in-law, Irl Johnson. He is preceded in death by his daughter Gloria E. Gronberg-Johnson and granddaughter Crystal Johnson. He is survived by grandchildren, Eric Gronberg and his wife Christa, Joshua Gronberg and his wife Kristen, Thomas Johnson and his wife Angela, Erica Johnson. He is also survived by five great-grandchildren, Kai Gronberg, Ian Gronberg, Serenity Johnson, Harmony Johnson, Melody Johnson. A visitation will be held on Wednesday, October 14, 2020 between the hours of 10:00 AM and 11:00 AM at Mayes Ward-Dobbins Macland Chapel in Powder Springs. Arrangements made under the caring guidance of Mayes Ward-Dobbins Funeral Home www.mayeswarddobbins.com 770-943-1511.

The family of Thomas John Gronberg created this Life Tributes page to make it easy to share your memories.

Thomas John Gronberg passed away at Emory Hospital on October...

Send flowers to the Gronberg family.