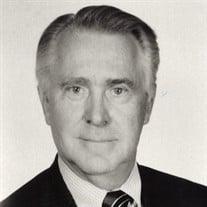 On April 13, 2020 Thomas J. McCleary died from Leukemia. He was born in Pittsburgh, PA to Paul and Caroline McCleary. Tom leaves as his survivors, Virginia, his wife of 67 years, Son Mitchell (Michelle Levey), Daughter Barbara Shelby and her two daughters: Lindsay and Ashton,. Son Wesley and his wife Cathy Humphries McCleary and their four sons: Jimmie Humphries, Parker McCleary, John Humphries and William McCleary. Sister, Marilyn Funk Kennedy (Duane) of Wernersville, PA and brothers, Richard (Claire) of Houston, TX, David (Edie) of Pittsburgh, PA, Jack (Nancy) of Hendersonville, TN and 10 nieces and nephews. Tom graduated from Perry HS, joined the US Navy in January 1950 and served until December 1953 during the Korean War. He served in the Ceremonial Guard in Washington, DC, and then onboard the USS Olmstead. He entered George Washington University and graduated in 1957 with a BS in Business Administration. Upon graduation he joined the IBM Corp. as a Systems Engineer, serving for 30 years and retiring in 1987. He served in Washington, DC, Oahu, Hawaii, Philadelphia, PA and finally in Atlanta, GA in a series of sales/systems management positions. Upon retirement, Tom worked for 12 different companies, serving as: Sales Manager, Recruiting Director, Director of Custumer Exec. Education, Project Manager for a Y2K project an several other positions in IT. Tom was a member of the Indian Hills Senior Mens Golf Assoc. where he served several 3 year terms on the Board of Dir; served several 3 year terms on the Ashebrooke subdivision Board of Dir., served more than 20 years on the Board of Dir. Of the College Vue Town Homes, 5 of which as President, in Statesboro, GA , was an original founding member of the Georgia Prostate Cancer Coalition, serving on the Board of Dir. For 12 years, the last 4 years as President. In lieu of flowers, please make donations to a Cancer Charity of your choice.

On April 13, 2020 Thomas J. McCleary died from Leukemia. He was born in Pittsburgh, PA to Paul and Caroline McCleary. Tom leaves as his survivors, Virginia, his wife of 67 years, Son Mitchell (Michelle Levey), Daughter Barbara Shelby and her... View Obituary & Service Information

The family of Thomas John McCleary created this Life Tributes page to make it easy to share your memories.

Send flowers to the McCleary family.