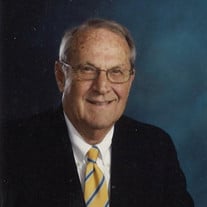 William Duberry Smith, Sr, age 89, through God’s grace went to his heavenly home on December 11, 2020 in Marietta, Georgia. Loving husband, father of three, grandfather of 7, Bill was born on February 9, 1931 to Virginia Todd Smith and Julian Craft Smith in Bethel, North Carolina. He was raised in a historical home and spent his summers working on a tobacco farm. Preceding him in death was his first wife of 49 years, Sydney Cobb Smith, his brother Julian Craft Smith, and his grandson, Mac McGrew. He is survived by his wife of 13 years Marian Hill Smith, his children, William D. Smith, JR (Julie) of Atlanta, Virginia Smith Walker (Duncan) of Macon, and Georgeann Smith McGrew (Mac) of Atlanta; his seven grandchildren: William, Camille, Julie and Jimbo Smith; Duncan Walker (Ansley); Sydney and Ann Myrick McGrew ; his sister Mary Todd Warren, brother John Smith, and several nieces and nephews. Bill graduated from Bethel High School in 1949. The Bethel High School basketball team, of which Bill was a member, won the state championship in 1948 with a 40-1 record. He attended the University of North Carolina earning a Bachelor of Science degree in Business Administration in 1953. While at UNC he walked on and played on the Freshman, JV, and Varsity basketball teams until an injury ended his career. He was a member of the Phi Gamma Delta fraternity and NROTC program. Bill served two years in the US Navy and obtained the rank of Lieutenant. In 1958, he started working at the A.D. Little Insurance Agency where he began his career in the insurance field. He later became an owner and the agency was renamed the Little and Smith Insurance Agency. He was a member of the Georgia Independent Agents Association and served on the board of directors from 1965-1970, including being President in 1969. He was a member of the National Independent Insurance Agents Association Board of Directors in 1971. Bill was involved with the Cobb County Independent Insurance Agents Association for several years in various leadership roles. In addition to insurance, he and his partner A.D. Little developed the Oakton and Greymont subdivisions. Bill coached youth basketball and football for The Boys Club, Bronco and Pony League baseball at Perry Parham Park and Heck Field for several years. In 1971, he was business manager for Marietta’s Bronco League World Series team. As winners for the Southern region the team went to Camarillo, California finishing in 3rd place. One of his most treasured awards was being named Coach of the Decade by 200 of his former players and cheerleaders. He was a dedicated family man who attended his grandchildren sporting and school events. Bill was a member of the City of Marietta School Board from 1973-1982 serving as Chairman from 1978 to 1980. He was awarded the Cobb County Public Service Award in 1982. He was appointed Emeritus member of the Marietta School Foundation in 2012. He was Cobb Landmarks Co-Chairman in 1981, Georgia Trust Conference Co-Chairman in 1982, Co-Chairman of Hickory Hills PTA and Marietta Jr High PTA. In his spare time, Bill enjoyed hunting and fishing. He was passionate about all sports and would rarely miss watching his beloved TarHEELS football, basketball and baseball games. He was an enthusiastic season ticket holder at Marietta High School football games and would rarely miss attending home games. He also enjoyed spending time at his cabin on Lake Allatoona and his house at Sea Island. Bill was a member of the First United Methodist Church of Marietta. He was a member of the Marietta Rotary Club where he was Scrapbook Chairman in 1972 that was awarded the best scrapbook in Georgia. He was a member of the Marietta Country Club and served on the board of directors for several years including being President in 1992. He was a member of the 1286 Stilesboro LP formed to buy, sell and develop 103 residential lots at the new Marietta Country Club. He was also a member of the Sea Island Club. There will be a service for immediate family at Mayes Ward funeral home. He will be interned in St James Cemetery with his first wife, Sydney and his deceased grandson, George Maxwell McGrew. In lieu of flowers, contributions may be made to the Marietta Mentoring for Leadership, https://mentoringforleadership.org/donate - or a charity of your choice. Live steam for the service can be found fifteen minutes before the service at 11:00 AM Thursday 12/17/2020 on the website: https://www.mayeswarddobbins.com/obituaries/William-Smith-320/#!/PhotosVideos

The family of William Duberry Smith Sr. created this Life Tributes page to make it easy to share your memories.

Send flowers to the Smith family.